The HFC started in 2016, protesting the rampant clearcutting of Nova Scotia’s forests and increased harvesting of timber for biomass. We wanted to halt these practices and to ensure that our government’s policies would foster restoration of the Acadian forest, protection of special places, and maintenance of biodiversity.

​To learn more about us and what we're currently working on please check out the links below and explore the site.
The HFC is calling for a Singing Season, wherein no forest harvests occur during peak breeding season - May 15 to July 31. Check out our new video below to learn more:
New maps reveal dramatic changes in Nova Scotia forests. Click on image below to learn more: 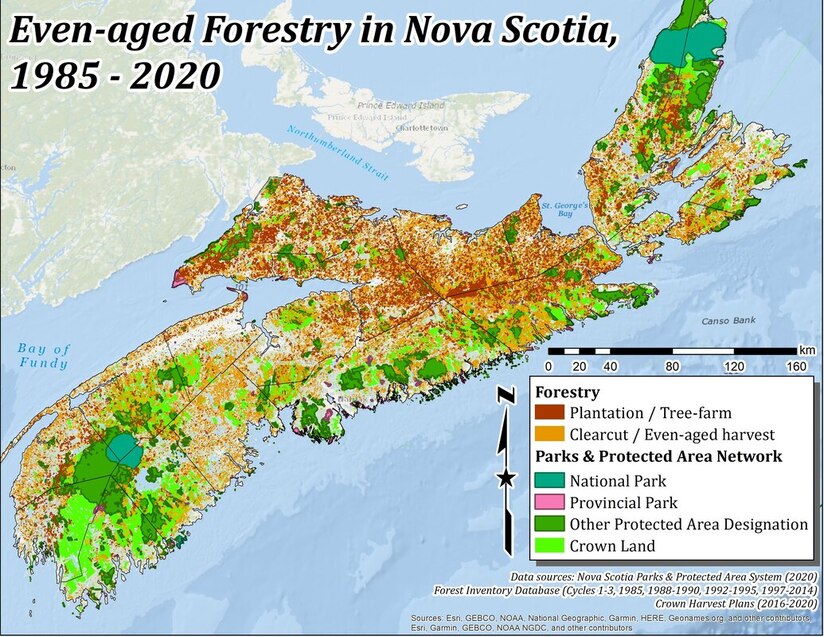 All video shot by drone in the Province of Nova Scotia

We are asking everyone to please send Moose postcards to current Minister of Lands and Forestry; Derek Mombourquette.

​Send one in yourself and ask friends and family to do the same. Donations towards costs are welcome but not necessary.

Our new premier will confront many crises that have been growing steadily in recent years. The plight of our forests will be among the most urgent because the consequences of reckless overharvesting will be with us for at least a century.You can see some of these effects in the following video prepared by Cliff Seruntine. It shows how forest interests are radically changing the natural features of south-west Nova Scotia, which was designated a UNESCO Biosphere Reserve in 2001. Changes brought about with the full support of LAF and our tax dollars.
None of these consequences of overharvesting has deflected the Department of Lands and Forestry from its mission – first laid out in the Forests Act of 1989 - to double forest production by 2025. Nor did two extensive public enquiries – the natural resource strategy consultation of 2008-9 and in 2018 Professor William Lahey’s critical review of harvesting practices - dent the department’s blind commitment to industrial forestry. Indeed, in 2019, the first full year after the government accepted Lahey’s report, some 12,395 ha. of Crown land were approved for harvesting (654 proposed cuts), and approvals for 2020 indicate that a larger area (15,343.9 ha. in 699 proposed cuts) will be harvested. An estimated 71.6 % will be ‘even aged’ treatments.

When you write to the press and the politicians, we suggest that you emphasize:
Contact your MLA now
All photos and logos are the property of The Nova Scotia Healthy Forest Coalition except where otherwise credited and used with permission.
The time for change is now.
HFC ACTION CENTRE