In his resignation speech, Premier McNeil spoke proudly of some of the initiatives he had taken, but he also admitted that he had made mistakes.

His failure to aggressively follow up on the Lahey review was one of those mistakes. We hoped that in the remaining months of his premiership he will rectify that. However, to date (October 6, 2020) He has given no sign that he will.

Meanwhile the Department of Lands and Forestry (LAF) has continued to approve harvesting applications at a level that seems to perpetuate the same rate of cutting that led to a public outcry during the 2017 election and thus to the the Lahey review itself.

In 2019, the first full year following the government’s acceptance of Lahey’s report, some 12,39 5 ha. of Crown land were approved for harvesting. Approvals for this year indicate that a larger area (12,476 ha.) will be harvested. Much of it – an estimated 71.6 % - being ‘even aged’ treatments (i.e. clearcuts).
The consequences are devastating, as you can see in this video:
Our five southwestern counties were designated a UNESCO Biosphere Reserve in 2001, making it only one of 18 such ecosystems in Canada. Biosphere reserves are recognized because they have special natural and cultural features. Yet, as Cliff Seruntine’s video (above) clearly shows forest interests are radically changing those natural features, with full support of LAF and our tax dollars.

Although the Premier committed to reforming forest harvesting practices he has not followed through.
*Update: On October 15 the government announced designation of 17 new and expanded protected areas, bringing the total protected land in Nova Scotia to 12.83%. (https://novascotia.ca/news/release/?id=20201014003) HFC is glad to welcome this important addition. We hope that a favorable decision on the proposed Archibald Lake Wilderness Area, in Guysborough County, will come soon and that protection will also be restored to the proposed Owl's Head Provincial Park. (see Halifax Examiner Jan. 13, 2020).

In the few months before he leaves we are asking Mr. McNeil to:
If Premier McNeil were to take these steps before he leaves office, it would solidify the advances toward forest policy reform that he made when he asked Professor Lahey to review harvesting practices and that he committed to on when he accepted the ‘spirit and intent’ of the review.

We ask you to write to Premier McNeil urging him to do this as part of his legacy.
On Twitter: @StephenMcNeil
or by E-mail: PREMIER@novascotia.ca or stephenmcneil@ns.aliantzinc.ca
Premier McNeil's MLA Page
MAY 2019
The HFC has recently reached out to all of our MLAs urging them to
consider in a non-partisan way, how forest policy might be changed so that Nova
Scotia can regain a healthy natural forest.
Read the Full Letter we sent to Nova Scotian MLAs
A short cover letter can be read below.
DECEMBER 2018
The HFC and EAC rallied outside the Halifax Courthouse in support of Pictou Landing First Nation and local fishermen.
The HFC calls on the Nova Scotia Government to Honour the Boat Harbour closure in 2020.
​#NOPIPE   #NOEXTENSION 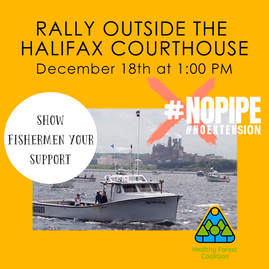 August 2018
The 'Independent Review of Forest Practices' in Nova Scotia has finally been released!
(i.e. The Lahey Report)
The HFC is hosting both the Executive Summary and the much larger Addendum Report below.
Here is a link to the documents hosted on the NS Dept. of Lands and Forestry website.
Lahey Nova Scotia Forest Practices Report 2018:
​Executive Summary plus Conclusions and Recommendations
Lahey Nova Scotia Forest Practices Report 2018:
Addendum to the report​
September 2018
Raymond Plourde of the Ecology Action Centre offered a well-reasoned response.
(Originally published in The Chronicle Herald, September 8, 2018)
OPINION: Lahey forestry report: The good, the bad & the missing
Raymond Plourde
Paul Pross summarized the HFCs response:
(Published by The Halifax Examiner, September 14, 2018)
HFC's Response to the Lahey Report - What do we do now?
Paul Pross
Spring 2018
When the Nova Scotia Legislature met for its 2018 Spring session the HFC prepared a series of weekly briefing memos, which we hoped would alert them to the serious issues affecting forest policy.  At the same time we circulated the memos to our supporters, through Forest Alerts, and encouraged them to take up these issues with their MLAs and/or in the local media.

In the links to the right we present the memos in the order in which they were sent. We do this for the record and also to help our supporters and others to track these issues as they develop and work their way through public debate.
​
Most memos were compiled by Paul Pross with assistance from Bob Bancroft (March 5) and Don Wilson (April 3). Peter Ritchie compiled the memo for March 19. Chris Kennedy and Mike Lancaster provided technical support.

Nova Scotia is fortunate in having a cadre of investigative journalists who are prepared to undertake the careful and time-consuming research needed to write about the issues we address here. In these memos there are links to their work, particularly that of Joan Baxter, Linda Pannozzo and Ralph Surette.